Step by step, Cass led me through 8 of the best days of my life. She is a rare combination of superior mountain hunter and superior human being. I was so lucky to be able to absorb nuggets of her knowledge, experience and encouragement up and down the mountains. Any time spent hunting with Cass will be unforgettable and a privilege. I can’t call her a “guide”, as she is much more than that. Highly recommend to anyone at any skill level.

I’ve hunted with Tom five times and every time we were on moose, often recordbook bulls. Tom provides a comfortable camp and great food and I’ve never hunted with a guide that works as hard as Tom. He goes the extra mile on every hunt, is constantly looking for ways to improve an already incredible experience, and knows the area and animals well.

“One more moose hunt before I turn 70.” That’s what I told my wife as I jumped in the pickup and headed northwest. Twenty four driving hours later I joined Tom Sallows & Brett Waller for a November moose hunt. Camp was west of Grande Prairie in truly beautiful country. Fresh snow added to the anticipation. Camp was comfortable and food was great. I passed on two younger bulls early in the hunt. Tom and Brett combined to give me just what I wanted. On the morning of the fourth day we hiked a clear cut in fresh snow. Cresting a hill we came upon an old bruiser of a bull calmly chomping on willows at 30 yards. The shot was a small part of the adventure. The rack spread was 54”, matched only by the smiles and backslapping of guides and hunter. I highly recommend this crew for any hunter interested in a great experience.

During the latter part of September 2010, my friend, Luis, and I hunted for a week with Tom Sallows in Alberta, Canada. We traveled away from the main camp each day to access a remote area that Tom was most familiar with, which he told us held the largest Canadian moose in the province.

Little did we realize that Tom was to be proven correct – by both of us – only a couple days apart in our hunt.

This was to be the largest moose taken in Alberta in 2010 with an outfitter.

A couple days later, we came upon another large bull moose that was preoccupied servicing two cows. It was my turn to take a trophy bull. I also succeeded killing the moose with an off hand shot at 100 yards. Fortunately it took one shot and he dropped.

This bull moose had a final score of 189 gross and 187 6/8 net – also making the cut for Boone and Crockett for a trophy Canadian Moose. This bull moose was the second largest taken in 2010 with an outfitter.

Needless to say, Luis and I are both thrilled with the results of our moose hunt with Tom. It is just incredible that one guide could take two hunters out and that both hunters would take B&C trophy bulls – only two days apart. It is a true testament to Tom’s intimate knowledge of the region he hunts, his skills as a guide/hunter, and his persistence in helping his hunters get the best possible trophies available.

Tom works hard to help his hunters succeed, to the limits of their capacity to cover ground, and will pace the hunt to meet their needs. He is also a nice person to spend time with and can be relied upon while hunting off the beaten path in remote, rugged country.

I strongly recommend Tom to any hunter interested in taking a trophy bull Canadian Moose in Alberta! You won’t be disappointed.

Many of our past clients are happy to talk to anyone still on the fence about booking: 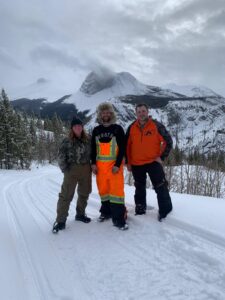