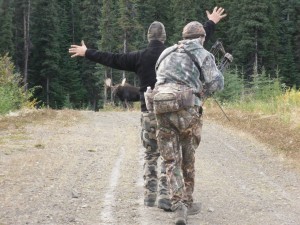 People pay good money to travel the world and take their chance at bagging a trophy. They have a right to expect an amazing experience in return.

To be a guide/outfitter at Compass Mountain, you need to pass three tests:

Time to meet the people that passed those tests.

Cass grew up in the Southern BC Rockies and went on her first sheep hunt at 10. Within six years she’d taken part in successful hunts for every species of sheep in Canada.

By her early 20s, she was guiding bighorn hunts herself, including seven years in the Northwest Territories guiding for Dalls, Alaska moose, and mountain caribou (while also outfitting for spring bears in BC).

Don’t let her size fool you. She once took down an 8’4″ grizzly on a solo backpack trip. She’s hunted all over the world, from the Arctic to New Zealand, with trophies from four continents and counting. But now she’s back to her first love: the Rockies. And when she’s not there with clients, she’s there for herself. Because there’s nowhere else she’d rather be.

Tommy was also born for the bush. Raised by a skilled hunter in the same part of the Rockies that he guides in today, he learned the craft the right way from boyhood.

As he put in the work, requests came in for guiding and TV work. And one day he decided to take those experiences and start up Mountain Man Adventures, which he’s now merged into Compass Mountain Outfitters (combining guides, tags, and territories).

Tommy currently runs a trapline in the area during the winter and spends the summers hiking and fishing. He also served as the first alternate on a curling team that won the 2015 and 2018 Briers and picked up a gold at the 2017 World Championship.

Looking to take down a big boy? Brett is more than just an amazing hat. He’a master at calling elk and moose, and has personally taken several elk that score well over 330”.

Every team needs a scout who knows how to get into the hardest areas where the best trophies are, and no one does this better than Brett. He’s also known by clients for his business skills, and for making sure that clients go home with good stories only.

(All three have done well in this business because it’s more than a business to them. It’s a way to help others have the same experiences they did growing up: exciting-as-hell hunts in one of the world’s most gorgeous areas, laced with good company, great food, and terrible jokes. If this sounds like something you’d enjoy, see a list of available hunts here.)